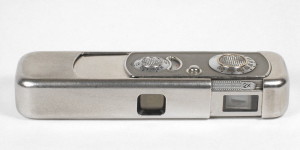 The MINOX SUBMINIATURE CAMERA was invented in Eastern Europe in the 1930s, and while it did not command as much popularity as the standard 35mm cameras at the time, it attracted the attention of intelligence agencies in Europe and the United States. Its small size and ability to focus on close-up objects made it a great tool for espionage – allowing for discrete use in surveillance situations as well as being able to produce high quality photographs of documents. During the Cold War, a spy from the Soviet Union used a Minox camera to obtain highly compromising intelligence from the US Navy by photographing classified ciphers and documents. 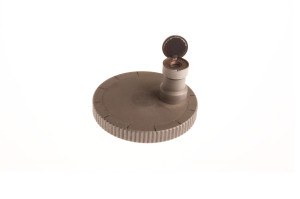 The MICRODOT CAMERA was invented for deception. Microdots are capable of holding a whole wealth of information – images, text, and messages – on a disc the size of a one millimeter dot. They can be made from a variety of materials, such as metals or polyester, and while they are typically round, can be made into different shapes as well. Using microdot technology, highly sensitive messages could pass unnoticed through normal, insecure mail systems, and be read by the intended recipient via a microscope.

PIGEONS were used in many different spy applications, including delivering messages created on MICRODOTS because of the plethora of information that could be transported with very little weight. PIGEON CAMERAS are made of aluminum so that they are very light, and can be attached via a harness to the bird. They allowed aerial photographs to be taken by operating the camera on a time delay. The same concept has been applied to much more modern technologies – such as remote controlled drones, which allow for much more control over flight path and camera angles than releasing a pigeon near an area that you wish to survey.